We’ll have standard Saturday sessions today with the below workout.

15 minutes to find a 2RM Hang Clean & Jerk (top of knee) – the BB may be dropped after the first Jerk. 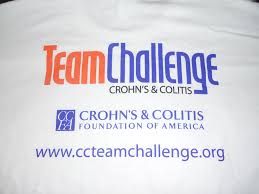 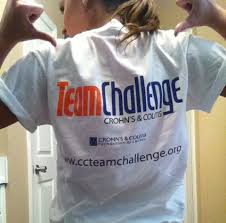 CROSSFIT SUFFOLK FOR LONG ISLAND TEAM CHALLENGE FUND RAISING EVENT will be taking place on September 21st from 1:30-3:30pm!  The Team Challenge is the Crohn’s and Colitis Foundation of America’s endurance training and fundraising program. Crohn’s Disease is an abnormal immune
response that may result in damaging inflammation of the digestive tract.  Digestive diseases affect nearly 1 in every 200 Americans!

One of our members is a part of Team Challenge and suffers from Colitis so we’ll be helping raise money for Team Challenge by hosting a special CrossFit Workout.  A donation of $20.00 is requested.  All proceeds go to the Crohn’s and Colitis Foundation of America.

Members of the The Long Island Team Challenge will be at CrossFit Suffolk to participate in the below workout!

Matt M. is looking to put a team together for the Tri-State Tough Mudder during the weekend of October 12th and 13th.  Please speak to me or Matt if you’re interested.

Is This Woman Being Healthy or “Selfish” CrossFitting While 8 Months Pregnant?   “An avid CrossFit fan who continued her weightlifting workouts just a few weeks from delivering a baby is being lambasted by commenters after she posted photos showing herself pumping iron, bearing her heavily pregnant belly.”—Liz Climas, The Blaze

[Note:  Here’s the gist: A woman experienced in at least 2 things that we know of, giving birth and crossfitting, continues to CrossFit while pregnant.  Said CrossFitting-Mom (and mom to be) posts photos of herself working-out-while-pregnant.  Uproar, controversy and rioting ensues.

Yeah…no there was no rioting….yet.  We were just joking.

Everything else is true.

Pregnant crossfitters working out?  We see no controversy at all.  We coach pregnant women on a fairly regular basis.  It hasn’t been a problem.  In fact those women have an easier labor and quicker recovery.  We feel sorry for pregnant women who don’t CrossFit.

My wife has done some form of strength and conditioning work for most of her life, even before CrossFit.  She has also given birth to three healthy children.  Her labor times were approximately, 4 hours, 1 hour and about 15 minutes for our youngest.  She remained active up to the day she gave birth.  My wife “snapped” back to her original tight body and was itching to leave the hospital 2 hours after giving birth.  And the children were athletic from early on.  Coincidence?  I think not!

Take a guess which traning organization/workout methodology has an awesome resource for pregnant women.  What?  Did you say CrossFit?  Well, yes, you’re quite correct!  Ironically enough, the resource is a blog called CrossFit Mom.  Andrea Nitz, the owner of CrossFit Mom, is a Level 1 CrossFit Trainer at CrossFit Brand X in California.  The owners of CrossFit Brand X are Mikki and Jeff Martin.  The Martin’s founded CrossFit Kids.  You see where I’m going with this?  These people know of what they speak.  And the rest of the CrossFit community has access to them.  The people making negative comments about Lea-Ann Ellison (the aforementioned pregnant crossfitter) don’t know of what they speak.  They’re plain ignorant.  They apparently and unfortunately don’t visit CrossFit Mom.

Do you want to know what really bothers me….aside from people who put ketchup on hotdogs?

What troubles me is that these ignorant, negative commentors had no problem revealing their ignorance publicly.  I’m ignorant on a subject or two myself but I don’t go to blogs and facebook pages to let everyone know that I’m ignorant.  I take my own advice which rhymes with “shut the buck up”.  I may be ignorant and you might think I am, but I’m not going to give you the evidence to prove beyond a shadow of a doubt that I am, in fact, ignorant.  I’ll stay quiet on certain subjects so you’ll always have to wonder whether I’m dumb as a rock. I may be, but you’ll never know for sure.

I’m troubled by the ignorant people who claim CrossFit is dangerous to the athlete or to an unborn baby.  I’m reminded of the mother who told one CrossFit coach that she feeds her child Lean Pockets because Hot Pockets are fattening.  She was serious. And ignorant.  All this mom had to do was stay quiet, but no, she felt compelled to blurt out the Lean Pockets gem when she was asked what she fed her son.

Between January 2006 and September 2008 there were 14 deaths during Triathlons, but nobody has suggested that triathlons are dangerous.  28 runners died doing marathons between 2000 and 2009.  Nobody has suggested that marathon running is dangerous.  25 high school football players died between 2003 and 2012.  An 11 year-old soccer player from Utah recently went into cardiac arrest and died.  Nobody is suggesting that football and soccer are “dangerous” and righfully so, but intense exercise gets more negative attention then all these activities combined.  And, it doesn’t even kill people.  Ignorance!]—George